Call me a Worker, not a Slave: Domestic Servitude in Indonesia as a reflection on modern slavery

This article is part of AASYP’s first-ever “Break the Chain” programme which highlights innovative solutions to modern slavery, human-trafficking and forced labour.

In ancient times, slaves worked for the interests of their masters who were generally landowners. They were forced to work and had no authority over themselves, or to even be sold or offered to people from other kingdoms. They were very isolated, depended completely on their masters, and were treated inhumanely. Now, with democratisation and human rights highly echoed, science and technology increasing rapidly, access to information becoming easier, does this progress contribute positively to the eradication of slavery? Have all workers received their rights normatively as workers?

One of the oldest forms of work in the world is domestic servitude, which can be categorised as modern slavery because this profession is not legally recognised, and workers do not obtain normative rights. The characteristics of domestic servitude themselves include no written contract, long working hours, no standard wage, no security, and their working place is a private area and not easily touched by the government as a public authority. They are very vulnerable to various forms of harassment and violence including of the physical, verbal, and sexual kinds, as well as trafficking.

Deepening the Issue through Data 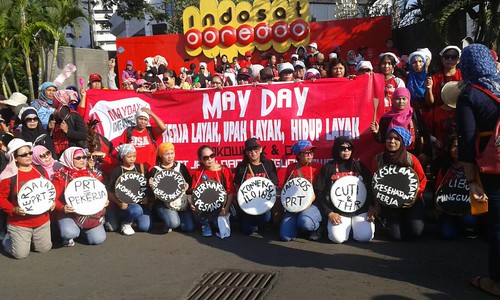 From the unpublished documentation of JALA PRT in 2020, which was conveyed in the press conference on 13 January 2020, domestic workers reported 149 cases of multi violence (physical, economic as well as psychological), 471 economic violence such as unpaid or deducted wages, and 21 sexual violence cases.

Advocacy efforts to legislative bodies in Indonesia to produce the Domestic Workers Protection Law have been active since 2004, but these efforts have not yielded results. Campaigns, public awareness, network development and organising of domestic workers are strategies that have been implemented. The efforts have shown changes in society, but nationally, this recognition has not been obtained. Rejection of the protection of domestic workers’ bill, known as “RUU PRT” was mostly because the decision makers in the legislative process considered it more in their position as employers than as public policy makers. It was also caused by a lack of understanding the comprehensive contents of the bill, which is actually not only to protect the domestic workers but also the rights of their employers. 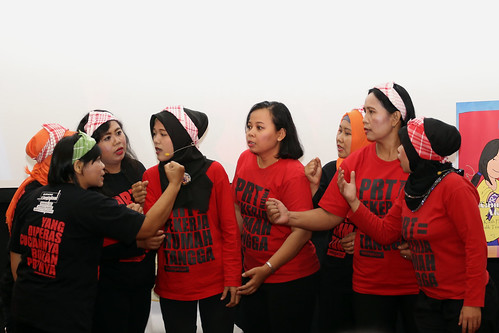 ASEAN countries and Australia must immediately push for the ratification of ILO Convention 189 and support the endorsement of national law for protection of domestic workers as part of efforts to stop modern slavery. Until now the Philippines is the only ASEAN country to have ratified the convention. Migrant domestic workers also need these supports. The public should stop calling them “domestic servitude” or “servant” or “helper” or “assistant”, but call them domestic workers. By using the appropriate language, we acknowledge their normative rights as workers. Movement of international youth groups has strong influence to voicing up this call to eliminate this kind of modern slavery. International campaigns, research or other strategic activities can be alternative ways of collaboration.

The Negative Externalities of the Linguistic Convenience Industry

We Are in This Together but Not in the Same Way: COVID-19 and Migrant Health Challenges in Thailand

Thinking Big: reflections on four qualities of a great Non-Executive Board Director

Grace is currently working as a computer teacher for SAPULIDI (Domestic Worker Union) under the control of JALA PRT, an umbrella organisation for 35 domestic worker groups, associations and unions across Indonesia. Grace was also the Asian Young Ambassador in the IV Global Conference of ILO in 2017.